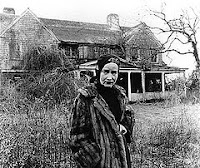 We garnered a great many hits on this typo in OhioLINK, 307 to be exact (257 without the asterisk), but quite a few were ambiguous or clearly reflected the correct spelling of two different people's names. And speaking of two different people, you'd be hard pressed to find two people as different as the two Edith Beales—"Big Edie" and "Little Edie"—who were the eccentric aunt and cousin of Jacqueline Kennedy, and black sheep of the family. They were also the subjects of a 1975 documentary called Grey Gardens by Albert and David Maysles; a follow-up in 2006 entitled The Beales of Grey Gardens; an off-Broadway musical (which sounds rather improbable, but is in fact quite wonderful); a PBS documentary about the making of said musical; and a 2009 TV movie starring Jessica Lange and Drew Barrymore. "Grey Gardens" was the name of the once crumbling and overgrown Beale estate in East Hampton, Long Island, where the two ladies are seen endlessly reliving their lives in a fascinating combination of joie de vivre and bitter regret. Check out this typo pair in your own catalog, and then check out the DVDs about this atypical pair of Edies. You won't regret it.
("Little Edie," courtesy of Flickr.)

In my library, 2 of the 3 results were owing to different spellings used in the item and the LOC subject heading, to wit:
"Alex & Me" by Irene Pepperberg has "African Grey parrot," LOC has "gray";
Margaret Rau's book is "The Gray Kangaroo at Home" and in this case LOC has "grey"!