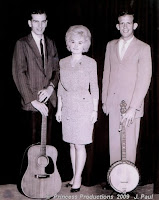 Dolly Parton was born on January 19, 1946, into a "dirt poor" but happy brood of 14 (her family may also have believed that children came "cheaper by the dozen") down in Sevierville, Tennessee. Known for her over-the-top, though accessible, Mae West-like sexiness, Parton looks relatively restrained in this early publicity shot and, despite the group's name—the Pick 'n Grin Bluegrass Band—none too terribly thrilled about it. The entertainer we've all come to know over the years may have seemed to some like a living doll, perhaps even a bit of a bimbo, to put it crudely, but nothing could be further from the truth. Dolly is deceptively smart, outrageously sweet, amazingly talented, and enormously kind. She has a supportive, retiring (and recently retired) husband back home—Carl Dean has reportedly seen his wife perform in public just one time—along with a touching how-we-met (and have stuck together for 45 years) story to go with him. The contented pair have no offspring of their own, but have raised several children together. Parton also has a very close relationship with her longtime companion and personal assistant, Judy Ogle. There were three hits on today's typo in OhioLINK this morning, making it one of "low probability" on the Ballard list. Hello, Dolly, and many happy returns of the day!