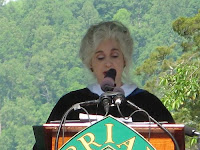 According to Miss Manners (aka Judith Martin), while it's a bad thing to be rude, it's even worse to call attention to another's lack of etiquette. Martin was born a deferential and detail-oriented Virgo in 1938, and was bred in Washington, D.C., where she continues to reside today. She also lived in various foreign capitals as a youngster, since her father was an economist for the United Nations. She majored in English at Wellesley College and worked as a journalist and theater/film critic before finally becoming the last word in "excruciatingly correct behavior." Ettiquet* has shown up uninvited six times in OhioLINK, and 78 times in WorldCat, so I do hope I'm not being too impolite in pointing that out. Please try and find some time today to discreetly remove this typo from your own catalogs. Thank you very much!

(Miss Manners giving a commencement address on "combining feminism, manners, and professional behavior," May 13, 2006, from Flickr.)