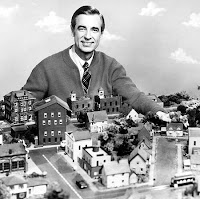 It's been nigh on close to a decade since we saw the final episode of Mister Rogers' Neighborhood (which aired on PBS for 33 years), though I'm sure we can all still hear our old friend's reassuring voice softly crooning as he hangs up his cardigan in the hall closet: "It's a neighborly day in this beauty wood, a neighborly day for a beauty, would you be mine? Could you be mine?" Neighbor sounds like kind of a negative word, since it begins with a homophone for nay, but Fred McFeely Rogers managed to turn it into one of the most positive words imaginable. We found 11 cases of today's typo in OhioLINK (and 134 in WorldCat). Won't you be a good neighbor and look in your own catalog now too?

(Fred Rogers with the miniature set for his television program, courtesy of Wikipedia.)

Carol Reid
Posted by librarytypos at 9:25 AM

Excellent suggestion, Geoffrey! There were six of these in OhioLINK and 181 in WorldCat. This is a good reminder to include British spellings or similar variants when searching for certain kinds of typos.