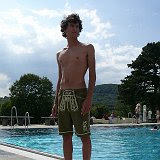 The 2009 Munich Oktoberfest saw the debut of a new fashion sensation. According to Spiegel Online, “newly invented lederhosen-style swimming shorts are going on sale at this year's Munich Oktoberfest as a beer-proof alternative to the traditional leather breeches .... The invention by Austrian restaurant owner Peter Kolb has taken Austria by storm in recent months and will be going on sale in two of the 14 giant beer tents.” For those not fortunate enough to be in attendance, the shorts can also be purchased at Kolb’s business site, PK Traditional. Alas, they’re still only available to customers in Austria and Germany, at least for the time being.

In certain circles, a clean catalog is the height of fashion. If you agree, then stamp out the not-so-trendy Fasion*, which occurs 16 times in OhioLink English-language entries and is a moderate-probability error. But watch out for transcribed fields and typos that should actually be the French word “faisons” (sometimes found in uniform titles).