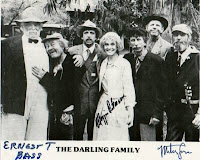 Although their talents were milked for hokey humor on The Andy Griffith Show during the 1960s, the Dillards (aka "Darlings") were actually an awesome bluegrass band from the Ozark Mountains. One of my favorite Dillards songs is called "There Is a Time," from the album by the same name*:

There is a time for us to wander
When time is young and so are we,
The woods are greener over yonder,
The path is new, the world is free....

Mitch Jayne introduces the group by saying: "We're the Dillards and we're all from Salem, Missouri, which I know you've all heard of. And we're all hillbillies. I thought I'd better tell you that 'cause you probably thought we were the Budapest String Quartet." You really can't go wrong if you say it with a smile—and with a drawl. There are 22 cases of Withdrawl* for withdrawal* in OhioLINK right now.

(Unpublished photo of the Darling family in the movie "Return to Mayberry," autographed by "Ernest T Bass," Maggie Peterson, and Mitch Jayne, courtesy of the Nip It, Nip It in the Bud! fansite.)