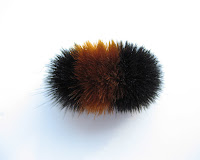 Sometime between early autumn denial and the serious hibernation de l'hiver is a period wherein, shivering slightly, we begin to contemplate the sort of winter we might be in for. An interesting way to do this is to examine one of those striped little furballs known as "Woolly Bears." These caterpillars are reputed to be harbingers of just about everything you'd want to know. According to Fumigants & Pheromones: A Newsletter for the Insect Control and Pest Management Industry, the longer the black bands, the "longer, colder, snowier, and more severe" the winter; the longer the brown bands, the milder. If the head end of the woolly bear is the darkest end, the start of the season will be the stormiest; if the tail end is darker, it'll go out with a bang. Also, the woollier the coat, the worse the weather. And lastly, if the caterpillar is headed south, it's trying to escape the coming cold. But if it's crawling north, it isn't too concerned. Unfortunately, however, on page two, the industry regrets to inform us that it's all just an old wives' tale. (You might want to check out which way the old wives are walking this year, and how woolly their coats are.) Caterpiller* emerges 27 times in OhioLINK and Catepillar* five.