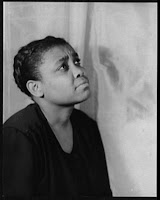 Although Porgy and Bess premiered in New York City in 1935 with a classically trained troupe of African-Americans, it was not deemed a legitimate opera until forty years later. George Gershwin composed the music and DuBose Heyward wrote the libretto, based on his novel Porgy and play of the same name, which he co-wrote with his wife Dorothy. I was interested to learn that Heyward also authored one of my all-time favorite children's books The Country Bunny and the Little Gold Shoes (with wonderful pictures by Marjorie Flack). This 1939 classic, written for Heyward's five-year-old daughter Jenifer, beautifully and gently promotes the message that anyone can achieve his or her goals in life, no matter what their color or sex. The Easter Bunny has always been seen as both white and male, but in this book Grandfather Rabbit's specially chosen helper and hare apparent (if you'll pardon the pun) is a humble brown girl bunny. When it comes to such things, we may think we know what it's all about, but as the song from Porgy and Bess proclaims: "It Ain't Necessarily So." Eleven instances of today's typo were found in OhioLINK, which makes it a "moderate probability" typo on the Ballard list. Make it your own special project to correct any cases of Porject* still present in your catalog.