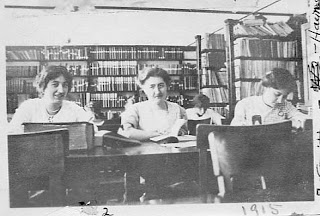 Way back when I was in library school, I was very lucky to have renowned reference expert Bill Katz for a couple of classes. And one thing he told us has resonated with me lo these many years. The "invisible college" was what Dr. Katz called our working colleagues—those folks, he said, to whom we can and should turn for answers. He implied that they were worth more in their way than all those rows and stacks of reference books surrounding them. It's a concept that has borne a lot of fruit for me. (And one that has apparently been around since the 1600s. A precursor to the Royal Society, the Invisible College comprised a small group of scientists in the United Kingdom.) The middle L in today's typo may appear invisible to the hasty cataloging eye, but it appears seven times in OhioLINK. Easy typo to make; easy one to miss. Just ask anyone.

(Earliest picture of the library as it existed in the Administration Building, later Draper Hall, 1915, from the State University of New York at Albany archives.)

This is worth shortening to colll* to catch errors such as "colllection."

Try looking for collg* too. I found some typos for that mis-spelling.