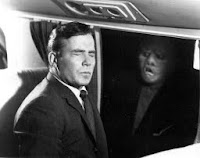 “There's no reason to become alarmed, and we hope you'll enjoy the rest of your flight. By the way, is there anyone on board who knows how to fly a plane?”

--Elaine, flight attendant on board the ill-fated jetliner in Airplane!

Emergency planing, a typo for Emergency planning, sounds like something James Bond or Indiana Jones might have to do during the course of an escape.

Planes are frequently scenes of disaster in films, ranging from the terrifying “mundane” possibilities of crashes to the more outrageous: passengers having to deal with time travel, serial killers, hundreds of snakes, or even gremlins tearing apart the wing.

Between the gremlins and the lack of leg room, I think I’ll avoid the air and take a train next time I’m on vacation.

(Image of William Shatner and the gremlin in the Twilight Zone episode "Nightmare at 20,000 feet" from Wikipedia)