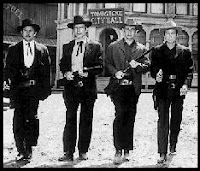 Today, October 26, is the anniversary of the 1881 gunfight at the O.K. Corral in Tombstone, Arizona, one of the most famous showdowns in the history of the American West.

The gunfight was between members of the Tombstone Marshall’s Office (the three Wyatt brothers and Doc Holliday) and the Clanton gang of cowboys, including Sheriff Johnny Behan, from whom we get today’s typo: Sherriff for Sheriff.

Better watch your typing fingers around these guys: they're quick on the trigger. Apparently Johnny Ringo once shot a man for refusing to drink whiskey with him—the victim preferred beer.

And be careful as well when checking “Sherriff”, as it can double as an author’s last name.

Image from the 1957 film Gunfight at the O.K. Corrall