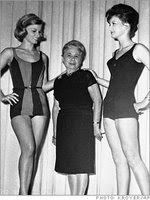 In the 1920s, Ida Rosenthal and her dressmaker friend Enid Bissett invented the bifurcated brassiere, and in the process formed the Maidenform company. "I'm a woman, hear me roar," one can almost hear Enid (who created the original design) saying. Or maybe it was Ida going: "I'm having a dream ... of my Maidenform bra!" Bissett had the "Boyish Form" that was popular back then, but was unhappy with the bandage-like wraps that had replaced the corset. Rosenthal was a more buxom bubbie, but every inch a feminist. Both were determined to liberate their sisters from the flat-chested flapper style of the day. With the support of Ida's husband William, this plucky pair kept abreast of the times and became important figures in the 20th century. Imform* shows up 29 times in OhioLINK, which puts it firmly in the B cup, er section, of the Ballard list. (A wonderfully detailed telling of this story is found in Harold Evans's 2004 book They Made America.)