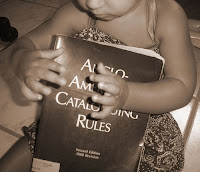 Being 30-something now (the second edition was published in 1978), AACR2 (Anglo-American Cataloging Rules) might seem downright decrepit to some of you young'uns, but never fear: the brand-new, state of the art RDA (Resource Description and Access) is here. (At least, it's scheduled for release in the third quarter of 2009.) Decript* (for description et al.) gets 31 hits in OhioLINK and Decrib* (for describe et al.) gets 25, making them both "high probability" typos on the Ballard list. (Note from RDA: quit saying "et al.") The new resource for resources does have its partial detractors (e.g., LC) and some folks have flatly decried the decree; but others find the changes it ordains to be timely. (It also reminds me that it's time to take my vitamins.) Speaking of changes, we're apparently no longer supposed to use [sic] or [i.e.] when transcribing a title. Write the misprint in the title field as it appears on the piece and then add a 246 field with the word spelled correctly.