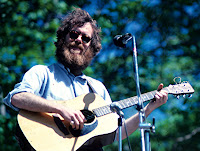 I saw Loudon Wainwright III in concert last weekend for the umpteenth time. This time he was with his old pal Richard Thompson of former Fairport Convention fame: the tour was aptly dubbed "Rich and Loud." To the younger set of Wainwright watchers, Loudon is Rufus's dad. But if you're talkin' 'bout my generation, Rufus is Loudon's kid. (In fact, I remember a reduced Rufus in the 1970s, toddling around the stage with his baby sister Martha during a McGarrigles concert in Saratoga, New York.) Although Loudon, at age 63, is clean-shaven and close-cropped, back in his "Dead Skunk" days he hippied it up with the best of them. Wainright appears 58 times in OhioLINK, but not all are misspellings. Wainwright + Wainright shows up ten times. We also get five hits on Loudon Wainright and two on Rufus Wainright. Loudon's father was a columnist and editor for Life magazine, so I'm sure he'd appreciate our efforts at improving access to the work of his talented son and grandson by making sure our records have their names spelled right—or rather, wright.

Stumbled across this, and wanted to add that Loudon Wainwright actually wrote a (quite hilarious) SONG about the many misspellings of his name. You can listen on Rhapsody (listed as A Fine Celtic Name), or download from iTunes (listed as T.S.M.N.W.A. - aka They Spelled My Name Wrong Again).
Enjoy!