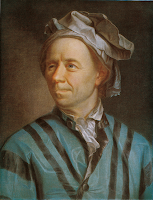 Gimme a G, gimme an R, gimme an A-P-H.... Mathematicians are generally not seen as the sexiest of men, and the subset of graph guys may need cheerleaders most of all. Leonhard Euler was the nearly blind Swiss genius who invented graph theory in the 18th century. He was, according to Wikipedia, a "pioneering ... preeminent ... prolific" scholar. His visual handicap caused him to be referred to as "Cyclops" by Frederick the Great of Prussia; nevertheless, he was highly respected. "Read Euler, read Euler, he's the master of us all," proclaimed Pierre-Simon Laplace (who was known himself as "the French [Isaac] Newton"). Gograph* is found 22 times in OhioLINK, which makes it a "high probability" typo on the Ballard list. Two of those are not actual typos, however, but instances where diacritics and the various employment of brackets and the like can mimic typos in a keyword search: [Lo]gographic and g¯ographie.

(Portrait of Euler by Emanuel Handmann, 1753, from Wikimedia Commons.)