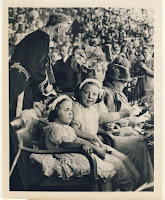 Yesterday's post talked about Loudon Wainwright III, folk singer and son of Loudon Wainwright Jr., who was a writer and editor for Life magazine. Another interesting note about Loudon's lineage is the fact that he is a direct descendant of Peter Stuyvesant, the last director-general of New Netherland (which included present-day New York State). Albany, New York—formerly known as Fort Orange—recently hosted Willem-Alexander (Prince of Orange and son of Queen Beatrix) and his Argentinian wife Princess Máxima, in celebration of the quadricentennial of Henry Hudson's voyage up the Hudson River in 1609. Museums all over the state have mounted exhibits in commemoration of this historic event. Two such local exhibitions are the one at the New York State Museum and the one at the Albany Institute of History and Art. Ducth (for Dutch) turns up five times in OhioLINK, two of them with "[sic]" in tow. (The prince and princess also have three little towheads, who were left at home in the Netherlands this trip.)

(1948 Associated Press photo from a friend who deals in old books and ephemera, picturing three generations of Dutch royalty: Princess Margriet, Princess Beatrix, Princess Juliana, and Queen Wilhelmina... Postscript: a loyal TotDfL subject is happy to see that we've got all our "Ducth" in a row here!)